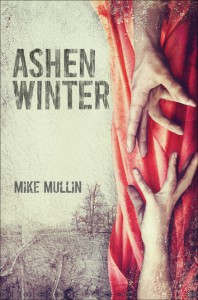 
Mike Mullin can tell a hell of a story.


In this follow up to Ashfall we pick up with life at Warren and the routine of family life in the post volcano world. Darla is still MacGyver and smarter than almost everyone, and Alex is still making stupid decisions left right and center, all while making you fall for him.

Alex
The one minor complaint I had in the first book was that once in while I didn't believe Alex's voice, but rather could hear the author speaking through Alex. It was minor, but I noticed it again in this book. Here's one example of many: "Darla started stepping desultorily in place." Again, this isn't a big deal, but Alex would talk with such maturity and use more polished words (like abattoir instead of simply saying slaughterhouse), but then turn around and say how he would have to get out of the way so he wouldn't "get brained" by thrashing arms. Minor I know, but it bugged me a bit, though obviously not enough to make me not love this book a great deal.

There was also a great amount of time Alex spent being almost tstl. In fact, he even says so himself which cracked me up: "I'm too stupid to live. I should never dragged Darla back out here, not for anything." Well my friend, there were too many times in this story that I was in total agreement with the first part of that statement. I get not wanting to devolve like so many others had, but there's a line dude.

All this irritation aside Alex is also a funny guy, and I love that about him. "I've heard rumors. You don't want to know." "If I didn't want to know, I wouldn't have asked."

Her face was gorgeous, golden in the lamplight, although the effect was ruined by the flutter her nostrils made with each rip-roaring snore.

The story
What I love about this story is how realistic it is, and how believable the voices of the characters are. There are no special cases, or magical finding-of-the-one-thing-that-will-make-me-live, no, it's all very hard and impossible and draining. And yet, even with all of that, Alex and Darla (and others) are able to adapt remarkably well. Books find their proper value in a world without Google (shudder), and people learn what it means to find out what they're really made of. To this point though, there was one part at the end where Rebecca tells Alex she isn't viewed as an adult at her age (14) and I didn't find that believable, but again, I was able to move past it.

This series (trilogy?) is deftly written with a cast of characters certain to make you wish you could grab them up and put them back in the world pre-volcano. These books are fast paced, engrossing, heart wrenching, funny, and a stand out in the distopian/post apocalyptic genre. My advise? These are must reads.

The disaster had warped the landscape of our minds--perhaps even more than it had altered the physical landscape.