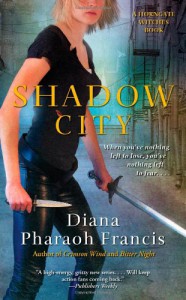 
Oh sigh. I wanted to like this book, but I really struggled to get through it, and had to force myself to come and review it. I liked the first one, but I can't really remember the second right now, and somewhere along the line I seem to have just stopped caring about this world.

One of the good parts is Max. Whatever Francis has gelling with her, it's good. I was more engaged when her chapters were on, and I was impatient for her to come back when they weren't.


What was with all the stray dogs all of a sudden?! Seriously. One would have been fine, but a pack, and one from the Chadare? It was a bit much for me.

Xaphan grinned. "Don't think a big dog will save you if I decide to barbeque your ass."


What was the point of the Memory showing up anyway? What was so worrisome about Alton's powers when he ended up getting taken care of with no issue whatsoever. What in the hell was the deal with Alexander going feral, and then suddenly having his Prime affect his--genetic makeup?--when he was already altered from the very beginning? What in the hell is the deal with Giselle?! Seriously, she has never been explained very well and suddenly she has this change of heart about Max, but I never understood where she was coming from before her big shift in attitude. She is also really rude with her people. The ones she claims to basically exist for and what not. Help comes and all she does is act like she's sucking lemons and spit attitude. The first time was when Alexander came about, and in this book it was when Holt came. I didn't make a highlight of her fit, but here is another fun little show of attitude and her usual behavior. "I don't need to inspire confidence. I tell you what to do, and you do it. Right? So let's get on it."

Moving on (because I got really annoyed with her and could keep going). Alexander really got on my nerves as well. He was absolutely pathetic throughout most of the book imo. I would not have been upset for Max to find some sexy-time with Ilanion, who even said "You're a jewel. What children we could have." Teehee.

I was pretty sad to find out about the angels and Niko, but part of that might be because of the grief that Max felt for them.

All in all, I didn't hate it, but I didn't really like it either, and anytime I take that long to read a book I know it isn't one I want to revisit. Usually.