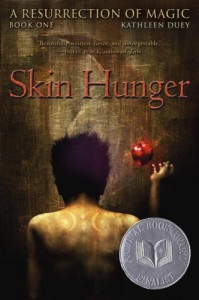 I'm really conflicted about how to rate this book, and sat in front of the review space for at least 30 minutes thinking about how I wanted to write this. I can see what my friends were saying when they point out this wouldn't be a crowd pleaser, or an easy read, but it wasn't nearly as dark and depraved as I was expecting and hoping (and I don't care to think about what that means about my psyche, lol). It's actually two stories that barely connect, and I was equally intrigued by both, though I think the school should have shocked me more between the two.

Sadima's story is back when magic was gone from the world; where the kings reigned and wars were waged. She was raised by her brother Micah after her mother, and her, were left to die by a "magician" who stole everything of value from them, and resulted in a crippling depression for her father. With their hatred of magicians running as deep as it was, they refused to believe that Sadima was able to understand animals and she ended up hiding her ability until a chance meeting with Franklin, who was seemingly a real magician, and not the usual charlatan. Years go by and Sadima ends up finding him again in another city leaving her only family behind after a heartbreaking fight. Slowly she helps Somiss and Franklin gather old songs so that Somiss can resurrect magic, but she is really a maid and slave to Somiss. I don't understand why Somiss was so obsessed about his father not finding him either, if he would end up walking in the King's Day procession like they were one big happy family.There is a scene where Somiss chases after some boy that he had beat bloody, and it was mentioned that his bed sheets were bloody; was this alluding to rape like I think it was? What nature of relationship did Franklin and he have? It wasn't clear to me after that scene. I would have liked more from the book, even though I can't say it didn't work as it was.

The other story is about Hahp, and a few other boys, who are sent to a wizard school, but like you might expect from the synopsis, this was more like a death camp than school. Centuries have gone between Sadima and Hahp's stories, but they're connected by Franklin and the abhorrent Somiss. In this school the boys are starved, isolated in the extreme, wear robes that chafe them bloody, and not allowed shoes in the stone prison they live in. They're forbidden to help each other and boys die of starvation.

Now, this is where I get frustrated, because I came to understand why Somiss would want to see them fast (that man is crazy and evil), but I really want to know why he wouldn't just let them go instead of killing them?! I can't say I know much of anything about Somiss beyond him being a spoiled rich kid who apparently can't control himself and must always be kept calm. Franklin is devoted to him so completely that I was as angry at him as Hahp was, but don't expect there to be any sort of resolution in this book, because you'll not find it. In fact, there's no climax at all, and it ended awkwardly in my opinion. What the hell was Somiss doing with the cage full of boys in the cave?! I know that one beggar boy ended up being a wizard, but what the hell was that whole thing about?!

I enjoyed this book, and even though I've complained about it, I really did like it, though I wouldn't easily recommend it. It's great for people like me who like the twisted stories, but it's not quite as twisted as I thought it was going to be.