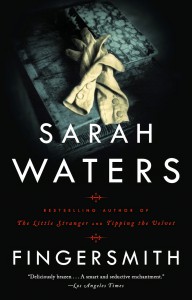 
This is my first (contemporary? historical?) book, and while it was written beautifully it took me three days to read it. I'm certain that is because I'm a big PNR girl, and this is very different. Here are two passages I highlighted to show how gorgeous the prose is:

There are no books, here. There is only life in all its awful chaos. And the only purpose the things are made to serve, is the making of money.

'Let me see to it,' said Nurse Spiller. She finished it off--two or three times, as if by accident, putting the point of the needle to my scalp. That is another place that don't show cuts and bruises.


Those aren't even a scratch on the beautiful writing, but I was too into the read to think to make my usual notes to draw from. The whole book was just a pleasure for my eyes, and even though it broke my heart I enjoyed every second of it.

The story is such a great example of the tangled webs lies weave, and how crippling they become. I was surprised several times with the revelations and didn't even think to expect something (I tend to be pretty dense when it comes to mysteries and such though,lol, but this one really came out of left field for me).

I would recommend this book to fans of it's genre for certain, but I don't know how to recommend it to other people who haven't read much, if any, of this genre (like me). I picked this up after Tatiana (don't know how to link to her) suggested it for another reader. The one thing I wish would have been included would be an epilogue. I want to know if Briar was fixed up, and did they stay there? What happened to Dainty? I hope Sue made sure to set her up once her affairs were in order. John Vroom I hope died--that guy annoyed the crap out of me! Did Maude continue her work? I like tidy endings to stand alones. :)