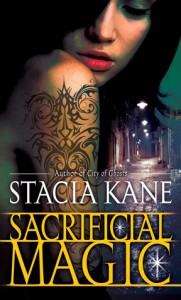 It was almost a given that I would give this a 5 star because of my love of this series. I admit though that I was a bit worried that I was going to be let down simply because of how high I held this series (thinking of course of the other series that just produced crap after several books in). I should have known that Stacia Kane would not do that me.

Sacrificial Magic took a long time to come, but the wait was worth it considering the quality of the story we are provided. Chess and Terrible left off finally coming together, and SM really takes us into their relationship, and all of the ups and downs that come with what happened to Chess as a child, as well as her addiction. Of course it goes without saying that Chess is mired in another heavy case that challenges her ability to keep her private life separate from her work life. I'm hoping that she doesn't get caught and kicked out of the Church.

Chess is one protagonist that is so flawed, and messed up, that it hurts to follow her around. She makes me want to hug and avoid her in almost equal measure. We get to see a lot more of what happened to her that drove her to become the way she is and think the way she does.

Or at least most of them, because if she got rid of all of her bad parts there'd be nothing left.

We had been granted small glimpses into Chess's life as a foster kid during the first three books, but we are treated, or tortured with, more detailed memories this time. They made me cringe and even tear up at one point. I don't even have the words. Chess--just, yeah. I don't have the words.

Moving on--Terrible. Oh Terrible. There isn't a person I know of who doesn't love this guy. He is special.

Seeing him was like being hit in the chest. Like something exploding inside her, a quick ravenous fire that made her shiver. So bright and so hot it still amazed her that no one else seemed to notice it, that every eye the place didn't turn to her while she went incandescent.

Yeah--that guy. I love the way he stands by Chess but doesn't change who he is, and isn't toxic to her. He understands her and doesn't force her to give up her pills because he can see that it isn't something she is ready to do yet. There is a scene in which I worried that maybe Chess would leave him behind, and I was so worried for him because no matter how strong he is, she is his weakness and I didn't want that pain for him. He deserves to have happiness just as much as Chess does, and I love that they are learning to give that to each other.