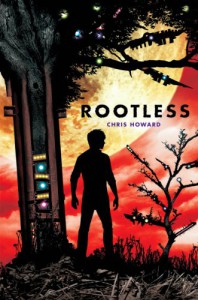 I was so excited about this book when I found it, and it should have been completely perfect for me, but instead I find myself forcing to finish it. I really mean forcing too; I checked the weather at least five times and circled my favorite sites at least 10 before finishing what turned out to be two minutes worth of reading. I'll try to break down where Rootless and I went wrong.

"In this dazzling debut, Howard presents a disturbing world with uncanny similarities to our own. Like the forests Banyan seeks to rebuild, this visionary novel is both beautiful and haunting—full of images that will take permanent root in your mind . . . and forever change the way you think about nature." It should have made me feel something! It didn't change the way I view nature at all, and I am passionate about the Earth and making sure I do all I can to stop damaging it. When I was a kid my parents referred to me as a tree and bunny hugger. I never said I came from a particularly PC family.

I question this new world that has a closer moon, no trees, and really no living thing other than humans and locusts zombie locusts at that-sort of. It was seriously gross and disturbing to think of them the way they were portrayed here. They evolved to eat humans because there was nothing else other than corn. And genetically modified corn. How were people able to survive for hundreds of years with no trees/oxygen producing material? Things are bleak certainly, but unless I want to really suspend belief I didn't feel like this new world would actually be possible, even though I took this to be one of those books that make people uncomfortable and show them that changes need to be made before it's too late. Pop said trees didn't just use to look pretty and grow food for eating. They didn't just give shade and break up the wind. They cleaned the water and held the soil together, and they made the air feel good for those breathing. Just stories now, though. Even my grandfather hadn't seen a real one. People date the Darkness more than a hundred years back.

There were mentions of lava fields, and the ocean being higher and stronger, but I feel like this area of the story was far too weak. Something about the moon, people said. Something happened to the moon and brought it closer. I guess it didn't used to fill up such a big chunk of sky. But it wound up close at the end of the Darkness. There was twenty years of night and when the sun came back, that moon was so close it made the ocean go crazy as hell. I didn't really feel the sting of dust in my eyes, or feel the sweat roll down my body while I was with Banyan, and I wanted to.

On a side note, Banyan referred the ocean as the Surge so I assumed that the name had evolved the way the rest of the dialect, but he flips through terms like this a lot for several things. When I read a book that has an evolved language setting I expect to see continuity.

Beyond my unease with how the world functions, were the characters. Banyan is oddly blank for me; I was thinking of him as very young (maybe 13 or so) and I can't bring his face to mind at all (but I did like the that author named him after a tree). I'm not sure at this point if it's because I feel so far removed from his story, if it was the story itself. Frost was decent as a sleazy bad guy I suppose. The main "bad guy" here is the GenTech company with their purple suited employees. Crow was like a bodyguard for Frost, although we later see that he is more than that, and yet never learn much of anything about him, like we never really learn much about anybody. Zee is a mystery to me still and I don't understand how she seemingly came back to life after being blown up?!, as well as her mother who was a clone. Alpha was one of the small good parts in the story, but again, I didn't know as much as I wanted to about her, and I didn't think her and Banyan had any chemistry at all. She was pretty badass though, I'll give the author that. When she firsts meets Banyan on the road he's broken down with Frost's son that was left behind, and Alpha sees that he was moving his hand to the nail gun he carried, so she shoots him right in the arm with no hesitation and pointed out to him later that he brought it on himself by trying to shoot her first. She wasn't sorry at all, and I liked that. She was also very much the able one of the couple, and Banyan was useless except when the author decided to make Banyan some kind of hero at the end. I guess. I didn't think it worked at all.

Why did everyone know who Banyan was in all the little settlements, and what made him so uber special, I'm not sure. It was made out like he was the best tree builder so there's that, but I don't know that he was the only tree builder.


Basically, this book had amazing promise, and not only failed to live up to said promise, but failed to entertain me at all. It could be me, so by all means give this a try and come let me know what you thought, but I won't be reading anything further in this series.